The Gallery of Casts and the Gallery of Murals and Stained Glass present two complementary perspectives on architecture and the painted and sculpted monumental décor from the Romanesque period (12th century) to modern times (17th-19th centuries). The museum’s two historical galleries describe a voyage of discovery across time, with a look at the most famous monuments and secular and religious buildings over the centuries. They provide visitors with insight into the social and cultural history of the periods of Romanesque, Gothic, Renaissance and modern architecture, as they meet the patrons, commissioners, architects, craftsmen and artists who presided over the boldest architectural creations.

Grandeur, extravagance and immersion are the watch words of a tour of France like no other.

With more than 350 plaster casts (some more than 10 metres tall!) and 60 architectural models, the Gallery of Casts retraces architectural innovation and sculpted monumental décor over more than six centuries. The churches of Moissac, Conques and Vézelay, the cathedrals of Paris, Reims and Strasbourg, the Arc de Triomphe at Place de l’Étoile in Paris or the arch of the Gros-Horloge in Rouen… all are represented by full-size casts of the most beautiful sculptures and fragments of their architecture and ornamentation. The plaster sculptures converse with one another and invite stylistic comparison, while offering a feast for the eyes. What is most admirable about them is revealed in this exceptional architectural setting, a legacy of the 1878 Exposition Universelle and the 1937 Exposition Internationale.

The Gallery of Murals and Stained Glass on the upper two floors of the museum traces the evolution of painted décor from the Romanesque period to the Renaissance. Thirty-six full-size reproductions of murals are on view in architectural spaces resembling those of the original works. The Abbey Church of Saint-Savin-sur-Gartempe, the Tavant Crypt Frescoes and the dome of the Cahors Cathedral count among the masterpieces of relief paintings, to which are added thirty architectural models, 48 reproductions of flat murals and six stained glass reproductions.

Details of architecture, sculpture and painting that often escape us in the buildings themselves are here made accessible to all. Whereas the original sculptures and murals may have be altered by time and human beings, the museum’s collections present them in a state often anterior to these degradations. Invested with inestimable archaeological value, these reproductions provide us with a fresh look at the originals. 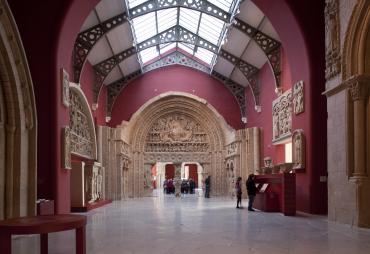 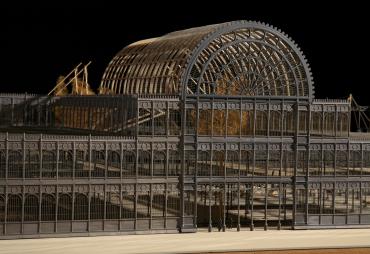 Industrial Revolution > Present day
Inaugurated in 2007, the Gallery of Modern and Contemporary Architecture presents a hundred buildings pioneers of architectural history in France from 1850 to the present day.