The school’s international activities, which contribute to its renown, take on a variety of forms. There are the many foreign students enrolled in the advanced degree programme (DSA) in architecture and heritage (15% of enrolments) and the missions of expertise in which the professors participate around the world. In addition École de Chaillot is regularly invited by different countries to take part in specialised training courses in urban and architectural restoration for architects.

École de Chaillot plays an active role in educational programmes in heritage management and restoration organised by foreign universities or institutions. These studies are designed for architects along the same lines as the DSA. In addition to co-writing and organising the programmes, the school sends professors and participates in evaluating student work. Currently, the school is involved in programmes in Bulgaria, Morocco, and Cambodia (the latter addresses architects from Laos and Vietnam).

As part of the DSA, a number of workshops are organised in partnership with foreign schools. These involve exchanges of students and teachers. On this basis, workshops have been held since the early nineties with the Ion Mincu University of Architecture in Bucharest, Damascus University, and Tongji University in Shanghai. Students can also fulfil some of their heritage course requirements abroad (site identification, urban studies). As an example, some students, working under the supervision of École de Chaillot professors, conducted traditional habitat surveys in Ahmedabad in India, while others undertook an important survey and analytical examination of cities along the Suez Canal in Egypt. École de Chaillot hopes to develop exchanges with other heritage studies programmes in Europe. The institution benefits from the Erasmus student exchange programme for the period 2014-2020.

Accelerated courses in heritage management and urban development are organised in France for foreign groups. École de Chaillot has developed field training courses for architects, urbanists or elected representative from China, India, Israel, Poland, etc. These study trips are structured around tours of heritage sites (monuments, ancient centres), guided by the architects, urban planners and government officials in charge of their management.

École de Chaillot belongs to several international networks that serve as forums of exchange between French and foreign colleagues on topics of heritage management and education. These include ICOMOS France (International Council on Monuments and Sites) and AEEA (European Association for Architectural Education).

École de Chaillot is also associated with the Richard Morris Hunt Prize. Created in 1990, this award allows a heritage preservation architect, alternately French or American, to spend six months in France or in the United States. To date, this prize has been awarded to a dozen former students of the school. 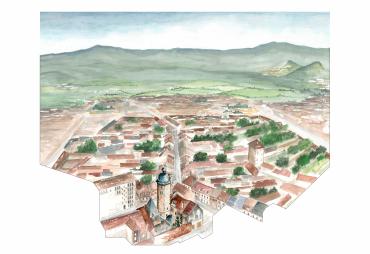